The white earthenware I used to make the main body of the vase has grog (little chunks of ground up, fired clay) in it, which is good for strength, but not detail work. I painted white porcelain slip (soupy porcelain clay) on the outside because it is very smooth, so I could sculpt very fine detail. I kept Pearl under plastic to keep her moist for the months I was carving her. She looked nondescript under all the bags, but then I would open up a section  to work on it, and I would see her, and it would make me happy. It was kind of magical watching smooth porcelain turn into cityscape hour after hour, day after day. I worked on one section at a time, opening the plastic in a "V," and spritzing the inside with water from time to time. I didn't spritz the outside because it could cause the porcelain slip to bubble and the detail of the sculpting to get smudged. I always wiped the inside base with a very fine sponge after spritzing to wipe up any trickles of water that could weaken the base if I let them sit there. 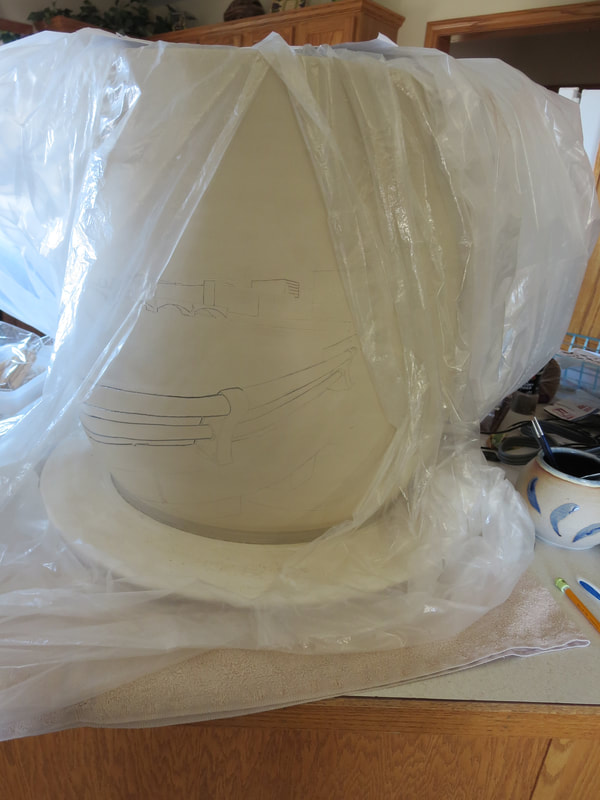 When I started out, in my mind I saw the scene in shallow relief. Especially the railings. They were curved and beautiful. But I had only ever done line drawings and a bit of texture in my previous work. I was scared that I would be biting off more than I could chew, trying a new technique on such a time intensive piece. I knew I couldn't try to add coils of clay to the wall to make the railing, because I had never experimented with that. If the coils cracked, that would be that. So as you see, I started out with line drawing. On this piece it felt cartoonish, and I wasn't happy. Then I started working on the bolts in the railing, and something happened. I carved them out. 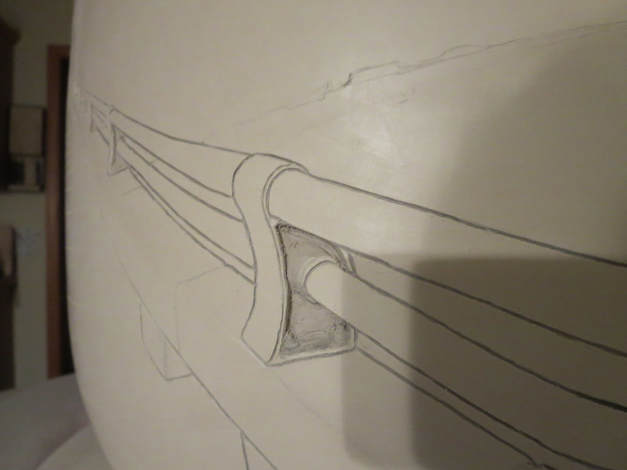 The little hexogonal nuts made me so joyful. And then it grew. I started working subtractively, carving away the water instead of trying to build up the railing. 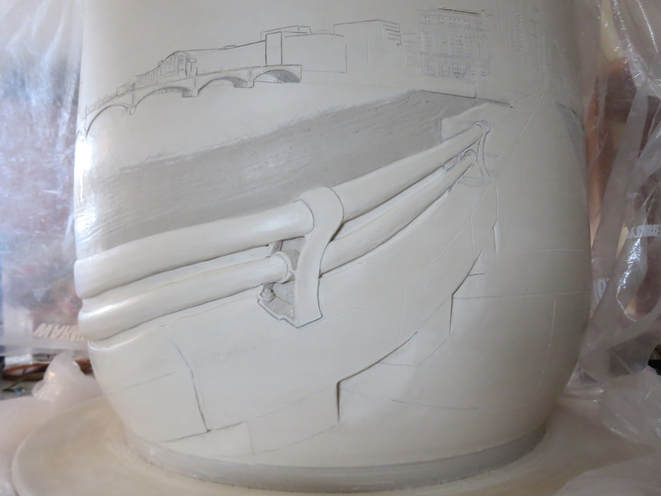 Then it started happening in the buildings. I took wooden tools and gently gave angles to buildings that I had already made with line drawing. I thought it would just be an accent here and there, but it took over, and soon I started making everything in shallow relief to match. It was beautiful.
I used mostly wooden tools. Sometimes I sanded them to make them small enough for the detail work I was doing. I also sawed and sanded chopsticks to various sized round and squared points. 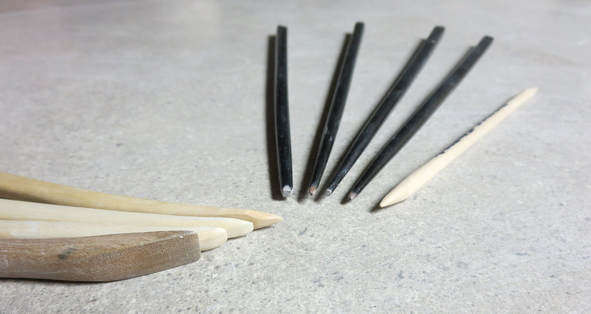 Finally all the buildings were finished and it was time to do the trees. I thought I would do line drawing for the branches and fill it with glaze. I began that way, but it didn't feel right. My high school art teacher, Mr. Rothfus, always said, "Don't make a five hundred dollar painting with a fifty dollar background." So I decided to do the branches in shallow relief. The trees became one of the most time consuming and rewarding parts of the whole piece. Here is how they grew, day by day.
When the sculpting was finally done, I dried her slowly under towels to prevent warping. Friends from church lent us their van to drive her down to Pottworks. After several weeks of drying, we put her on top of a running kiln to really heat her up. Then she was finally ready for the bisque kiln. That is the most dangerous firing, because things can explode if there is moisture in them. That's why we spent so much time and effort drying her. And she came through.
Powered by